Georgian Manor in Glen Ellyn for sale for $2.1 million

This Georgian house in Glen Ellyn is “commanding when you see it from the outside,” but inside, "it's cozy," says Paul Green, who with his wife, Ellen, has owned the Riford Road home since 2013. 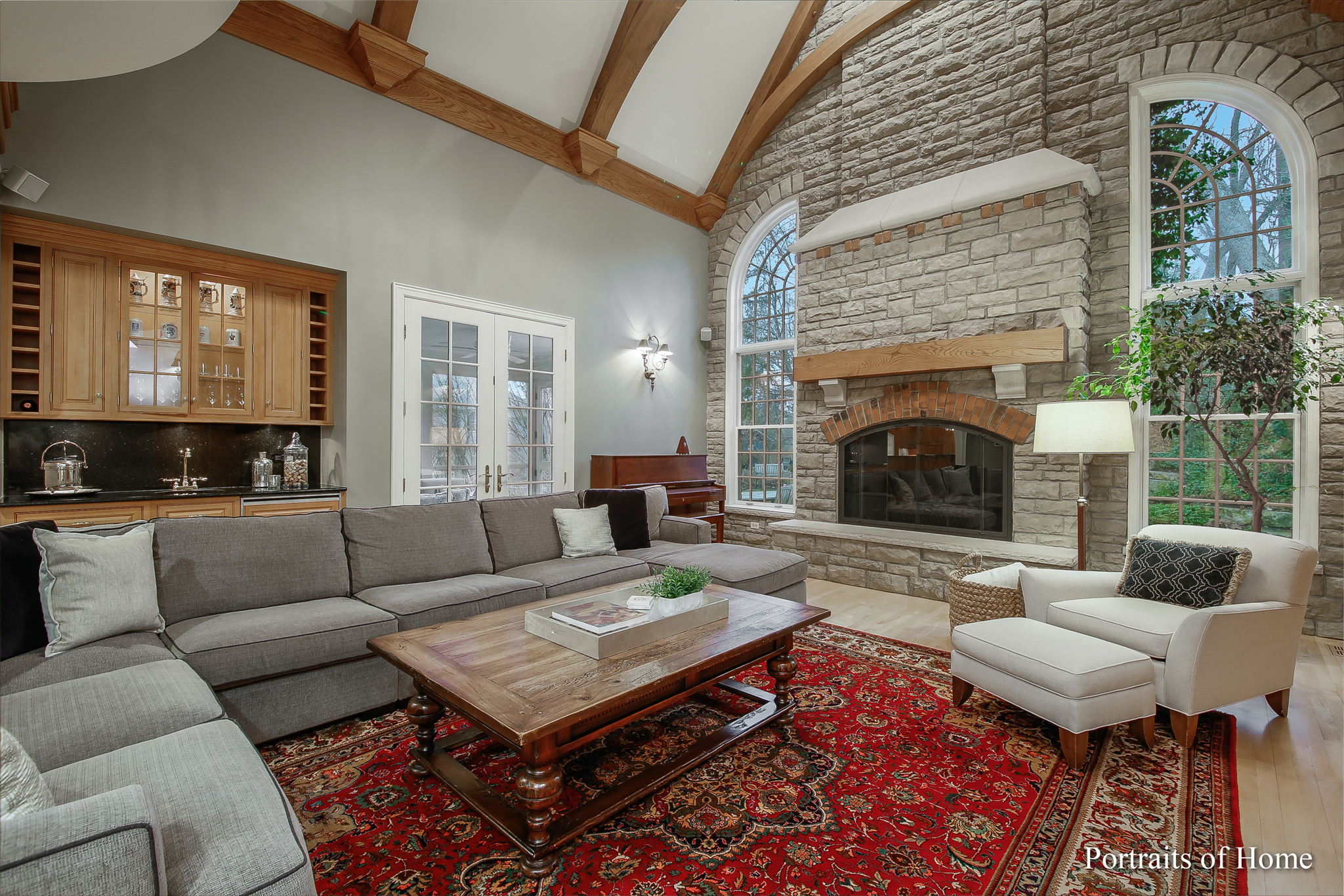 There’s a family room with a tall stone fireplace, another pair of fireplaces across from one another in the living and dining rooms that “frame you when you’re in those rooms,” Green says. There's also a screened room off the breakfast room that is a favorite place to read or unwind with a  cocktail after work.

Outside, numerous tall trees on the half-acre site and all around the neighborhood give the house a “verdant setting,” Green says, and it’s a short walk to pretty Lake Ellyn Park in one direction and downtown Glen Ellyn and a Metra station in another.

“It’s been a great place to raise four kids,” says Green, a merchandising executive who is married to a physical therapist.

Now, with three of the kids grown and gone and the fourth in high school, the Greens are planning a move into the city. They’re putting the house, a six-bedroom built in 2002 on a little over half an acre, on the market April 1. The price is $2.1 million, and the home is represented by Kathy Quaid and Maureen Rooney of Quaid and Rooney/Keller Williams Premiere Properties.

The highlight of the interior is the family room, with a wall of stone rising beneath the high, wood-beamed ceiling. There’s a built-in bar area seen at left in the photo. “This room is really the wow factor of the house,” Green says.

The arched windows bring in views of the tall trees outside, and the fireplace “can heat the whole floor,” he says.

One key change they’ve made to the house while living in it is refitting the three fireplaces to burn gas in ceramic logs, which makes them easy to use at any time and quick to extinguish.

The couple bought the house in 2013 for $1.74 million, according to real estate records. 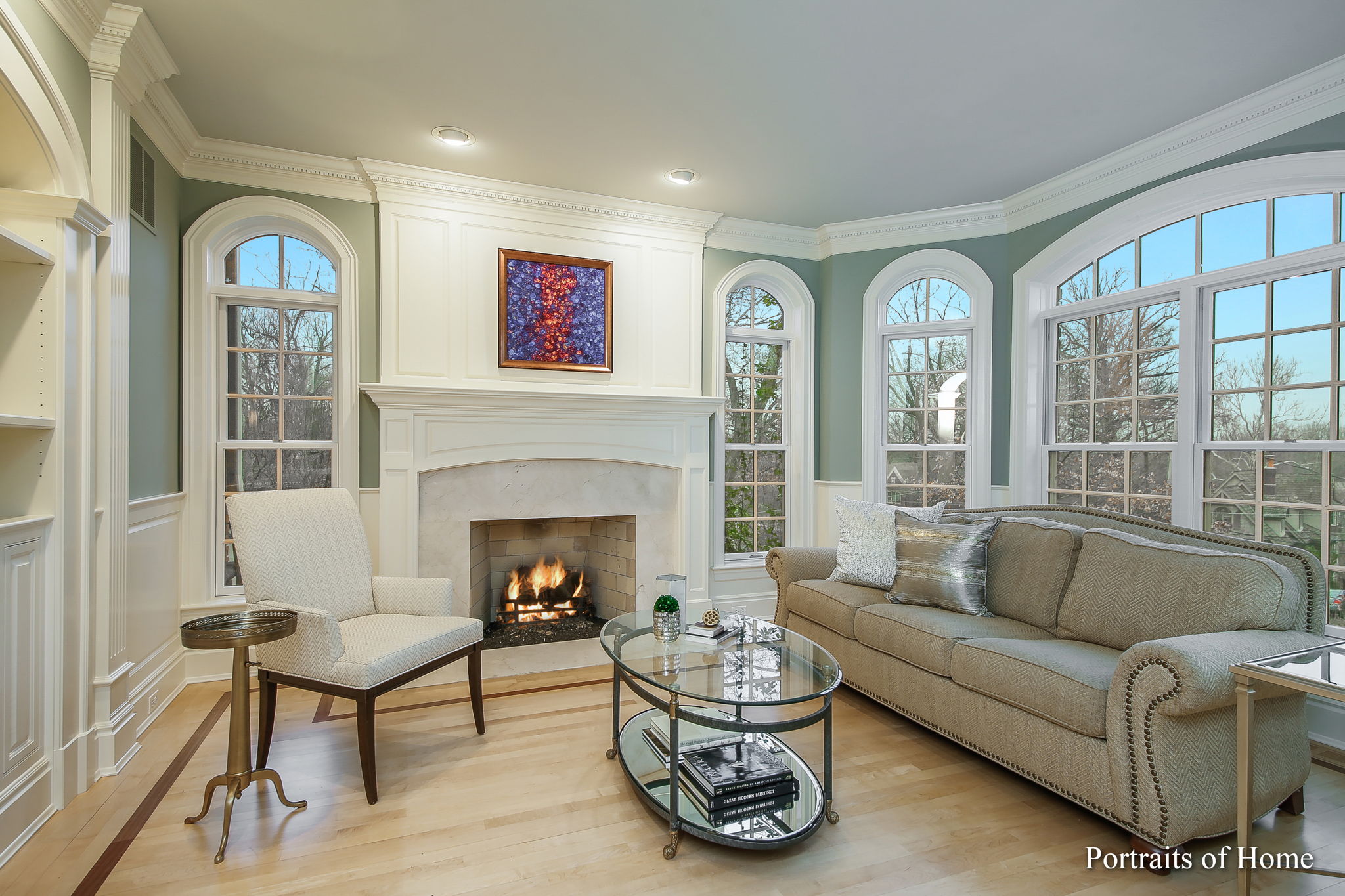 “We use the living room more as a reading room,” Green says. It's an inviting space, thanks to arched windows, wainscoting and built-in bookcases.

The flooring throughout the house’s main floor is maple with a Brazilian cherry inlay. The fireplace here is like a bookend with another, in the dining room. 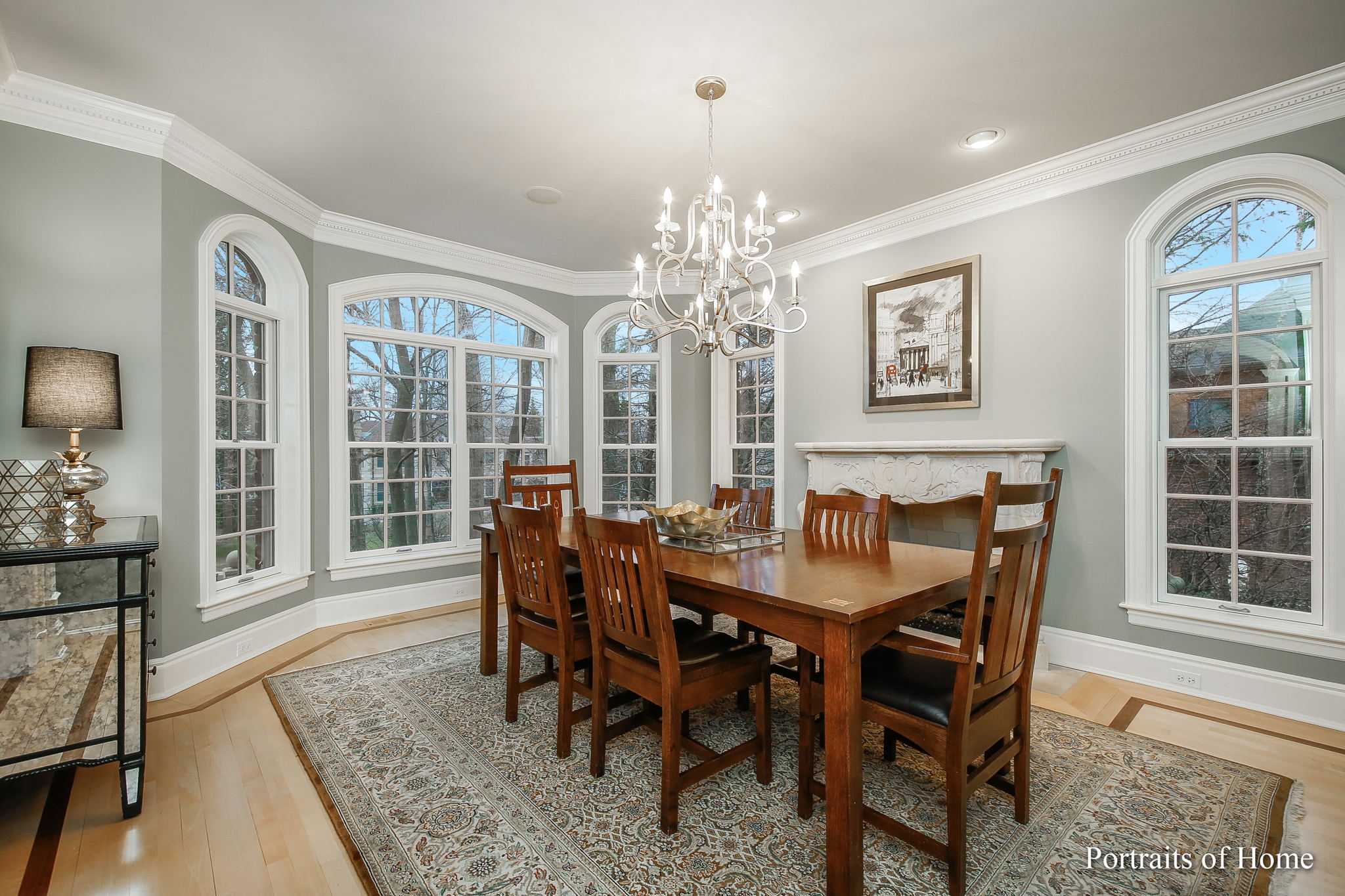 Here’s the other piece of those bookends, the dining room fireplace.

“It’s a really warm feeling to have those two fireplaces flanking you,” he says.

The dining room “is an everyday room,” not a walk-by room, Green says. It’s a pleasant place for dinner, with a view out the windows of the tall trees and other landscaping in the front yard. While the trees were bare when these photos were taken, Green says that during the warmer seasons, leafy greenness fills the windows. 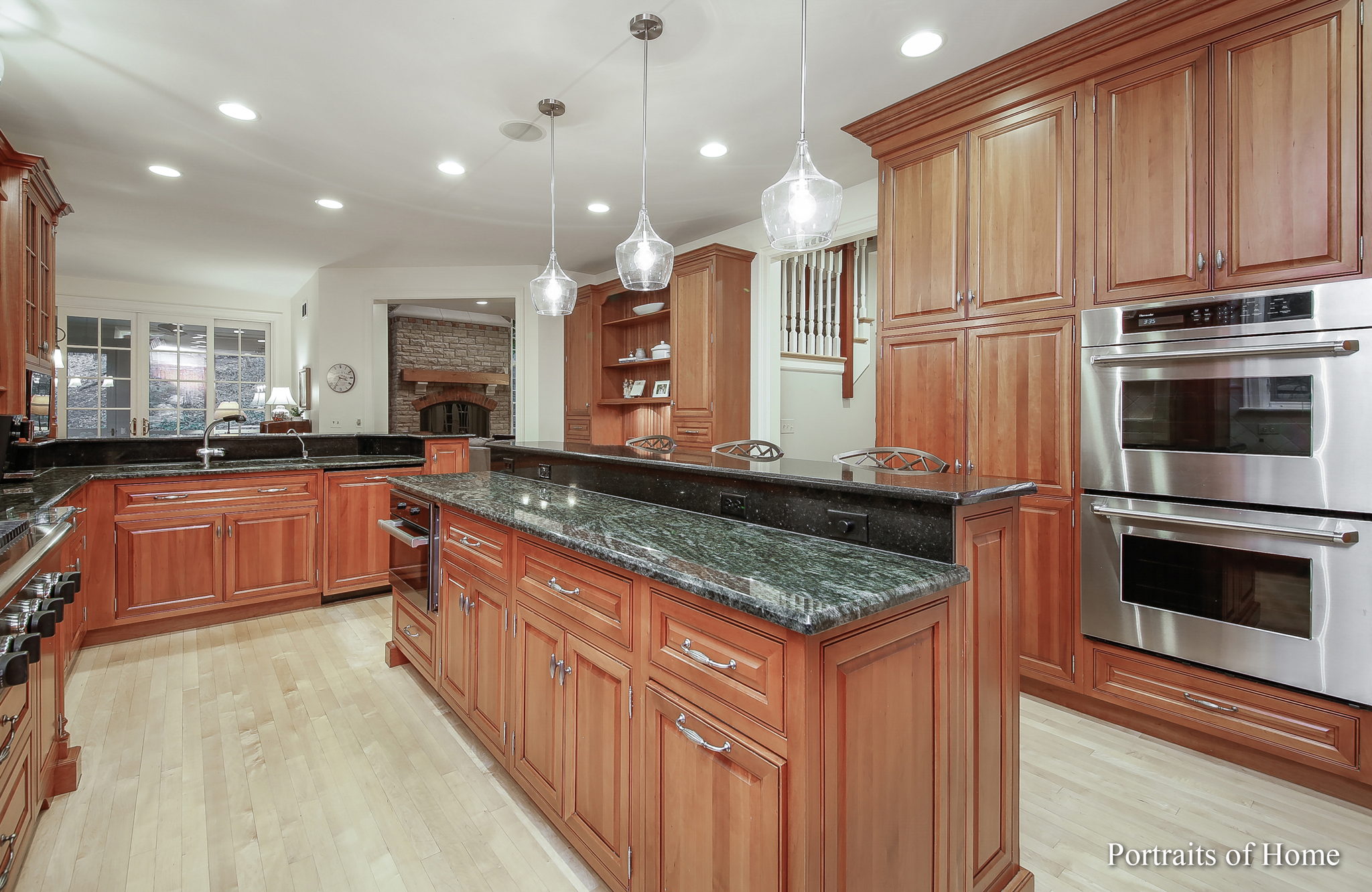 A large kitchen with lots of storage suits Ellen Green, who cooks dinner for the family nearly every night. “We’re not big on going out to dinner, because Ellen is a terrific cook,” Paul Green says. When the family entertains, the spacious kitchen and its big island easily accommodate guests without squeezing the cook’s workspace.

From here, the sightline is across the breakfast area out to the screened porch. 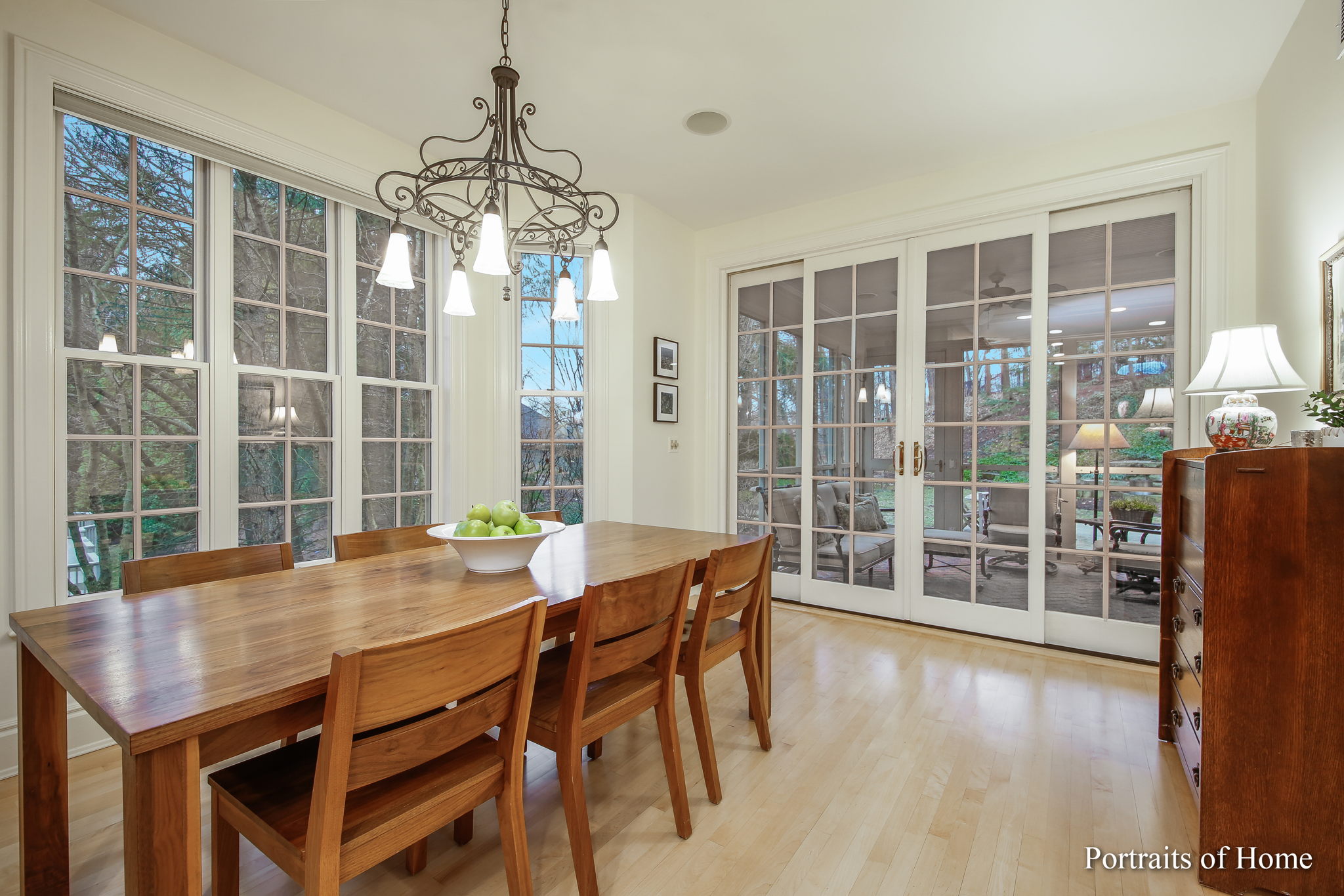 The breakfast room and screened porch can function as one large connected space in good weather. Tall windows “bring in the outside” in any weather, he says. 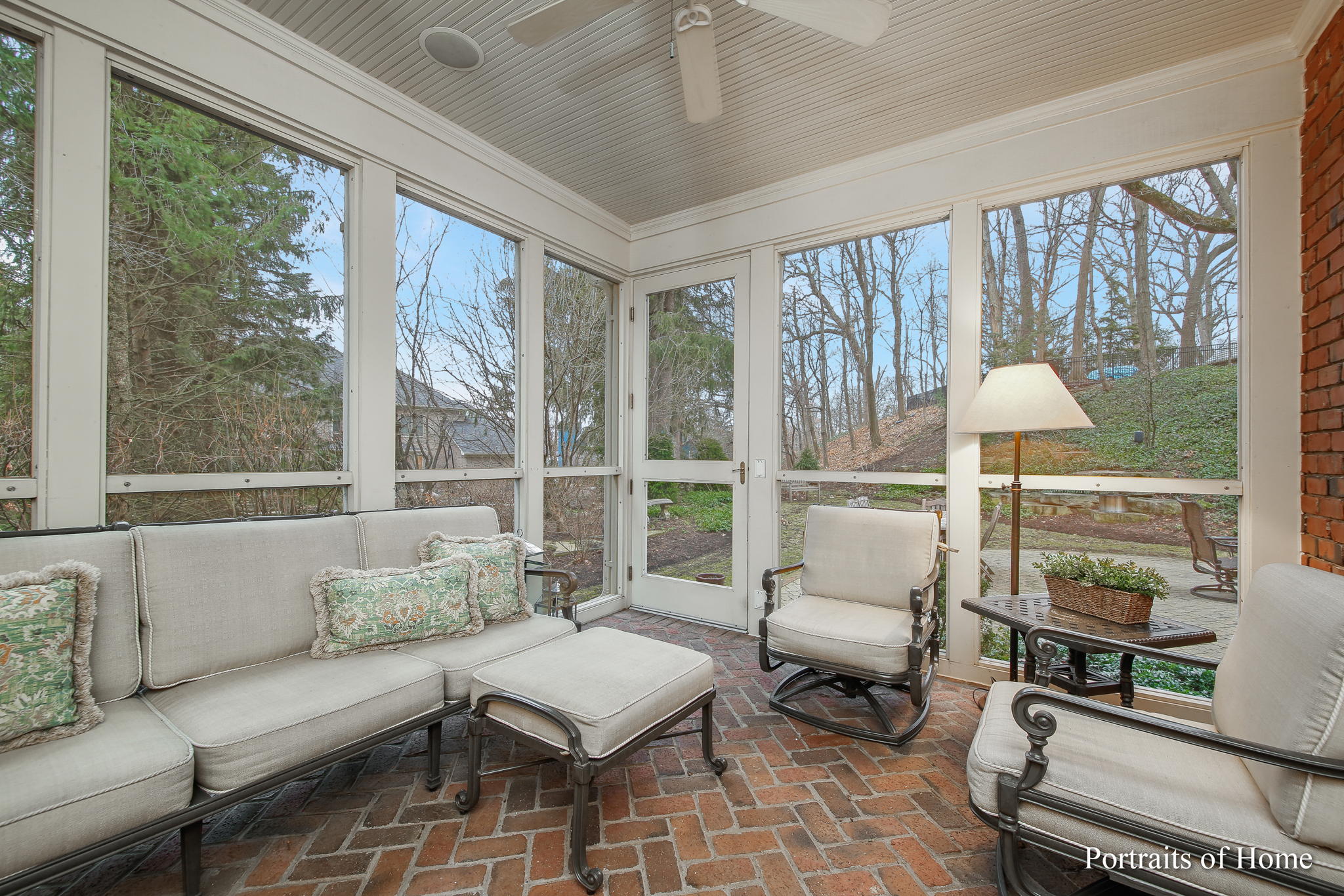 The couple upgraded the whole-house sound system, including overhead speakers on the screened porch. “After work, I like to sit out here with a cocktail and some music,” Green says.

Visible outside on the right is a small slope that Green says is alive with bluebells and other wildflowers in spring. As part of this house’s backyard, it was also just enough slope for the couple’s son to take his earliest snowboarding runs. 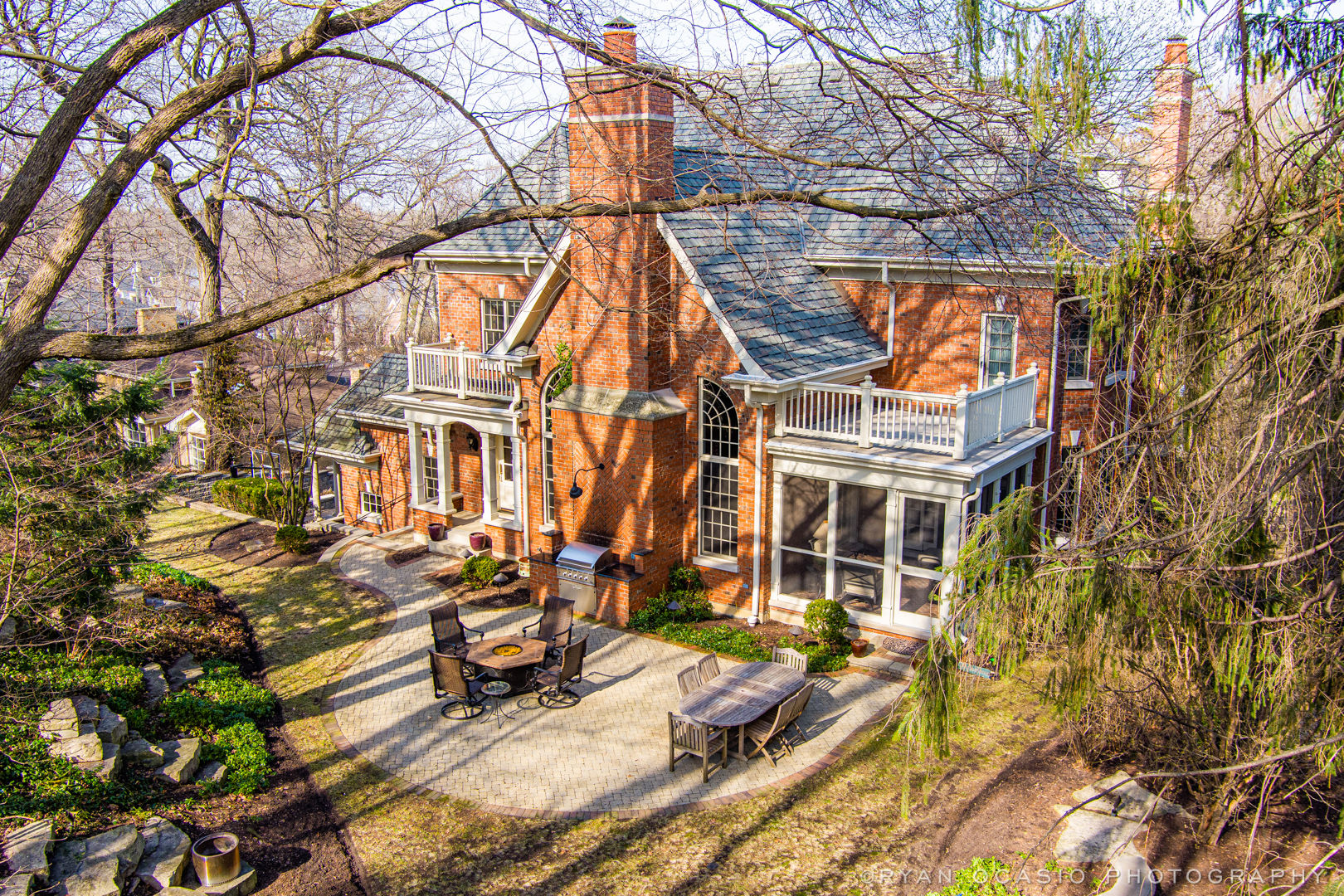 The sloping site and tall trees means “we have a big backyard but almost no lawn to cut,” he says. The house takes advantage of its wooded setting with not only a screen porch on the main level, but also with a second-story porch above it. A grill is built into the base of the chimney for outdoor cooking, Paul Green’s specialty. 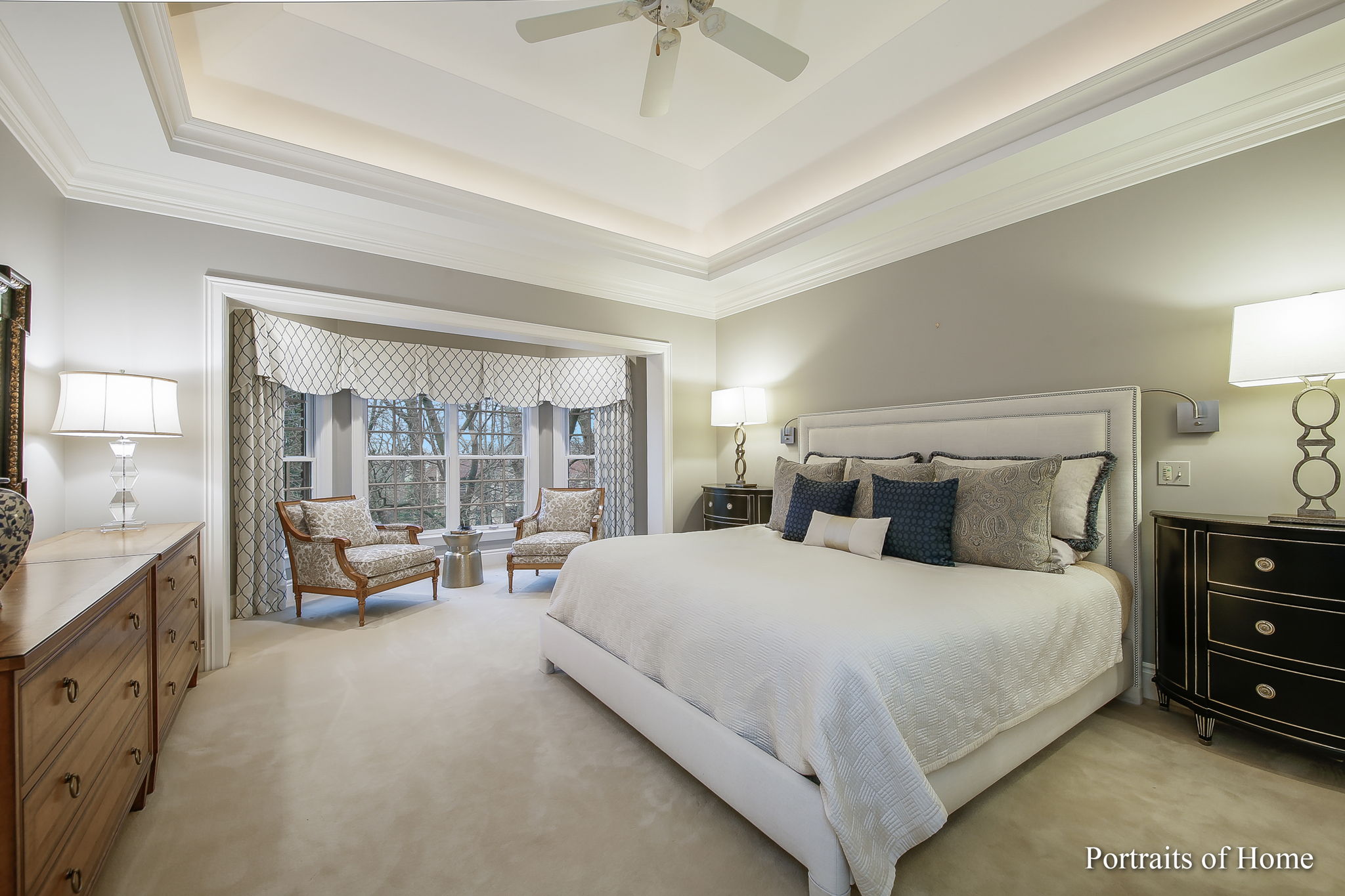 The large primary bedroom includes an inviting place to sit, in the window bay. “When the leaves are out, it feels like you’re sitting in the trees,” Paul Green says. There's a balcony off the bedroom as well, "with the trees all around you," he says. "It's really quite pretty out there." 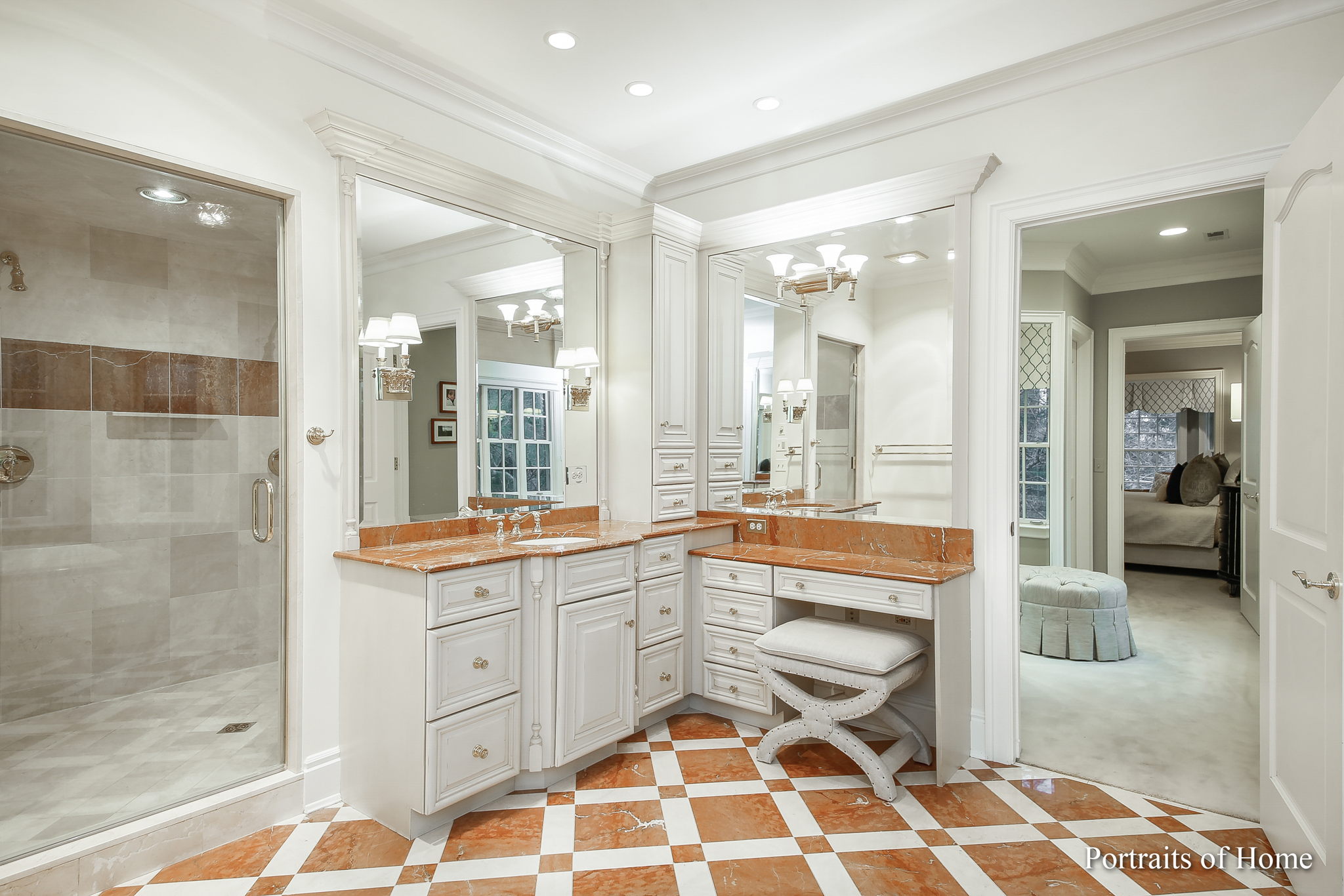 “What I like most about this bathroom is the walk-in shower,” Green says. With two showerheads and steam, “it’s great to go in there and warm up when it’s cold outside,” he says. Between the bath and the bedroom is a dressing room, seen at right. Off of it are two walk-in closets. Also on this level are three children's bedrooms, each with its own en suite bathroom. 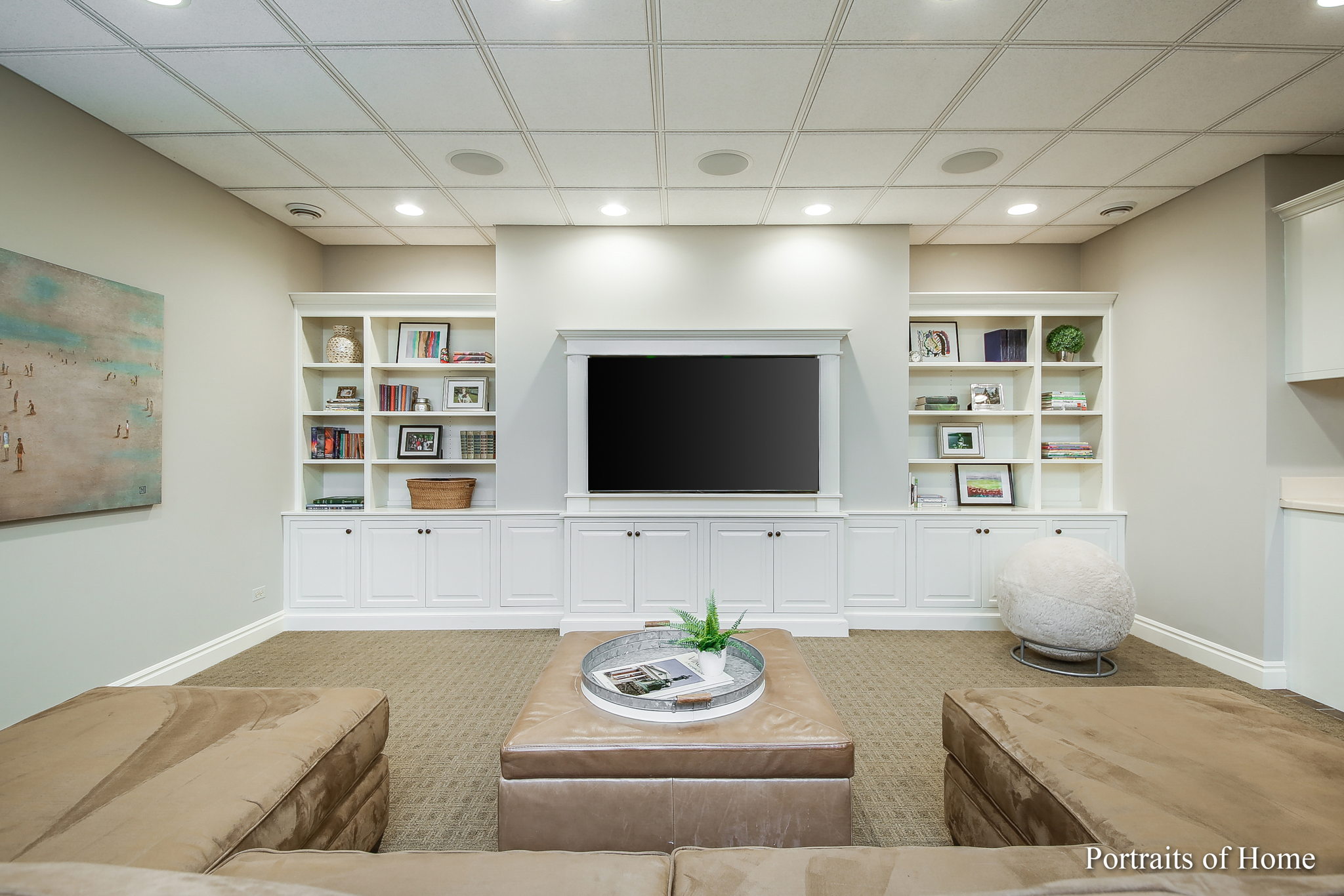 In the basement are a media room, a wine cellar for a few hundred bottles, and two of the six bedrooms, as well as access to the three-car garage. 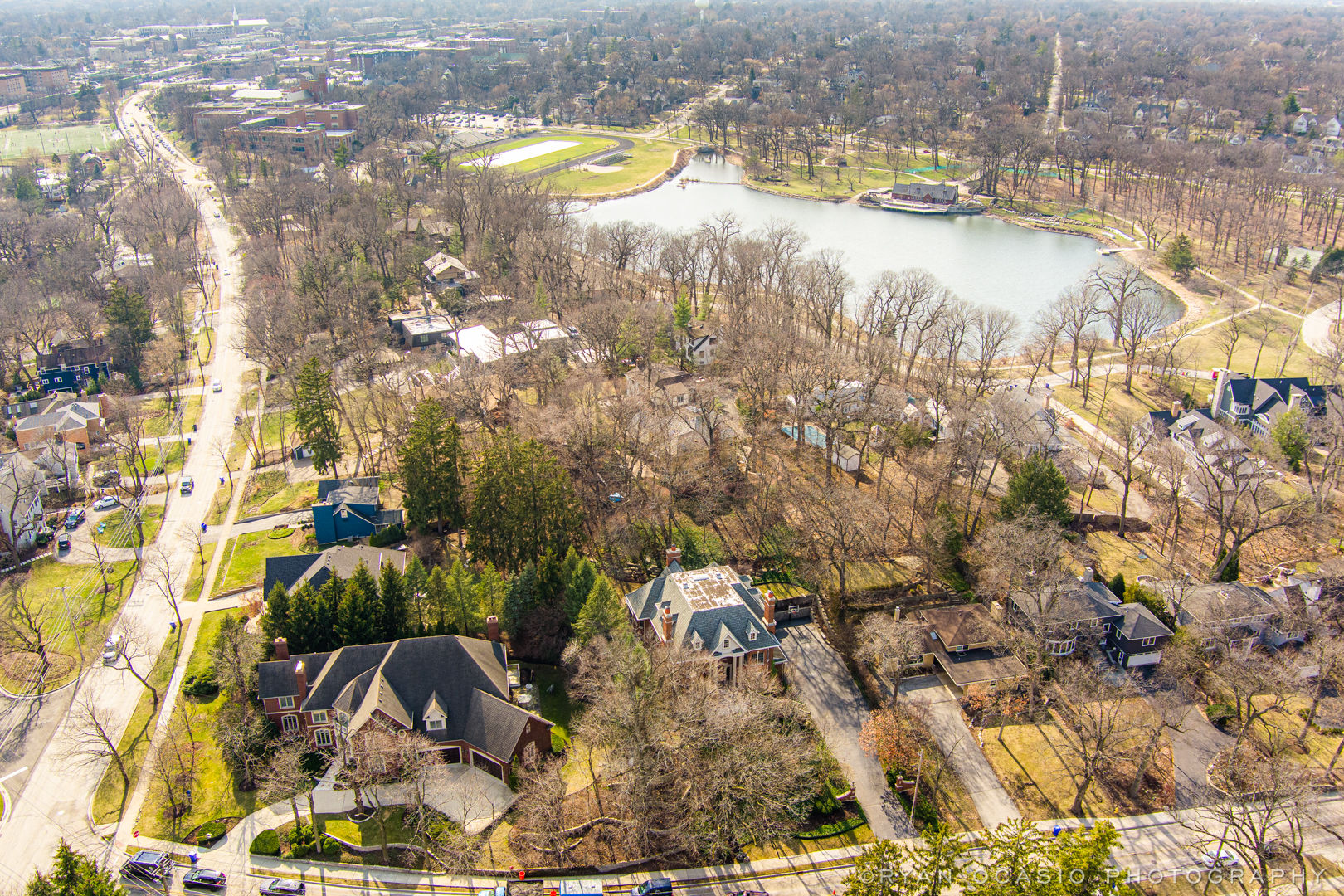 In this aerial photo, the Greens’ house is at the bottom, center. The road at left leads to Glenbard West High School, half a mile away, and beyond that to the Metra station and downtown Glen Ellyn. The body of water at upper-right is Lake Ellyn, originally an artificial lake dug in 1889 for the Glen Ellyn hotel and now the centerpiece of a park.

Browse the homes currently listed on the market by our team. Please remove some of the selected filters.
View all listings

Based on information submitted to the MRED as of date and time shown below. All data is obtained from various sources and has not been, and will not be, verified by broker or MRED. MRED supplied Open House information is subject to change without notice. All information should be independently reviewed and verified for accuracy. Properties may or may not be listed by the office/agent presenting the information. © 2022. http://www.mredllc.com/comms/resources/DMCA_Notice.pdf Updated: 3rd February, 2023 11:51 PM (UTC)

We're here for you. Simply reach out and we'll get in touch with you right away.

We're just a phone call away.

Send us your questions or let's find a time to meet.

Sign Up
Already a User? Sign In
You have been successfully registered
Please check your email.
Go to the homepage
Sorry something went wrong
Please try again.
Try again